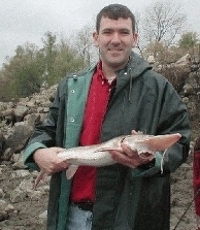 Many investigators have assumed that the bioenergetics of ectotherms respond similarly to conditions along environmental gradients. My colleagues and I have been challenging this view, finding that energetic adaptations can influence growth and behavior of fish along broad latitudinal gradients. Current research is exploring how adaptations influence biotic interactions in young fish, ultimately affecting their recruitment to older life stages.

I also am interested in understanding how fish life histories respond to natural variation in ecosystem characteristics and human-induced perturbations such as exploitation and habitat alteration. Changes in life histories (e.g., schedules of maturation, growth rates, timing of reproduction) will greatly affect population structure and dynamics. My students and I are exploring these complex issues in a variety of systems including sturgeon populations in the Upper Mississippi River and catfish assemblages in the Wabash River.

The movement of fish in aquatic ecosystems is driven by both abiotic (e.g., temperature, oxygen, flow) and biotic (e.g., competition, predator avoidance, food availability) factors. Presumably, fish move to find habitats that are closest to their "optimal" physiological and reproductive requirements. In rivers, fish may move into backwater or tributary habitats to reproduce or to evade adverse conditions in the main channel, such as cold temperatures and high flow. A current group of students is exploring the relative importance of riverine versus tributary habitats in Smithland Pool of the Ohio River, and relating this to seasonal changes in abiotic conditions. Our hope is that this research will be used to provide guidance for habitat improvement projects. Because navigation by barges may alter flow regimes at main channel habitats and influence habitat for fish, this research may lend insight into the potential effects of navigation on resident fish assemblages.

Csoboth LA, Garvey JE. 2008. Lateral exchange of larval fish between a restored backwater and a large river in the east-central USA. TRANSACTIONS OF THE AMERICAN FISHERIES SOCIETY 137: 33-44

Colombo RE, Garvey JE, Wills PSA guide to the embryonic development of the shovelnose sturgeon (Scaphirhynchus platorynchus), reared at a constant temperature. JOURNAL OF APPLIED ICHTHYOLOGY 23: 402-410.

For more information on my research program, please see my lab webpage.